Well I've got Danea locked in (thanks Jenn) and two mrore hunters...but my lead male fell through...
Posted by allen etter at 1:58 PM 3 comments:

Now this is interesting

I called the deadly forest creature in Darkness Aftermath the Garum because I liked the sound of the word...but guess what...GARUM is a real thing...go HERE to find out...
Posted by allen etter at 7:02 PM No comments:

The storyboards are done...for real this time...no, really...I mean it.

Honestly it does really feel like a completed story now.

Also, it looks like the ball is really rolling. I spoke to some drummers who are very excited about the soundtrack. I think I've got a lock on the lead male. I also think I have a lock on the pre-moster version of the Garum. I've also finished the call sheet for the actors. I'll be finishing the script this weekend and then next week I'll meet with Ron at ITT to set up the CG team.
Posted by allen etter at 10:49 AM No comments: 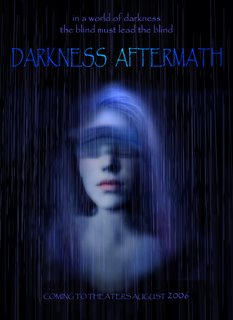 Two really cool things happened...I spent a half hour going over the fight scenes and fighting styles with the fight co-ordinator. He's totally psyched about it and has some great ideas.

Second, STAR WARS III came out on DVD. Need I say more?
Posted by allen etter at 6:21 PM No comments: