I've assembled about 110 out of 530 storyboards in photoshop. I've been tweaking the color of these black and white sketches so that the editors (me a some guiy name Greg...you know who you are) can color sinc the final movie for the proper mood. Deep blue for outdoors, a yellow orange for indoors, blue green for when the Garum is near, black and white for flash backs and story telling and finally, brown for the shots where Lilly confronts Drifters. I should have all of the images ready in about a week and then I can edit them into the animatic.

Last night at as one of many Christmas gatherings was winding down and I finished off my second bowl of homemade French onion soup, I did some reworking on the script. I'm trying to limit Gwen's dialog and define the Garum's origins better. I've already decided to include the original two sets of storyboads I made for the Garum's origins on the DVD. Had I gone the original direction, the story would have linked much closer to the Entropy Gate universe. As is, the only connection now is Lilly.
Posted by allen etter at 12:12 PM No comments:

We got our camera man!

I spoke with a student at ITT who has a sweet new video camera that cost like about twenty of my paychecks or more. He's been itching for a project to shoot. I am so ready for March to arrive so we can start shooting.

Costumes go into production over Christmas break as well as starting our first soundtrack recording session.
Posted by allen etter at 8:56 PM No comments:

All of those who are involved in the film need to send me your email adresses or phone numbers so that I can set a meeting up.

RENDERINGS OF THE GARUM 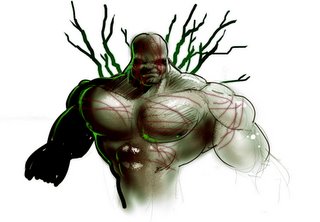 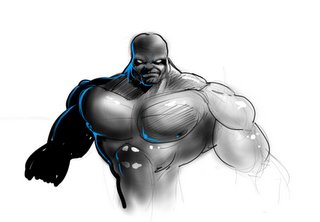 Ron has designed this rough sketch of the Garum to flesh out his physical structure. I added a few things (the top image) just to see what direction the design could go.
Posted by allen etter at 11:05 AM No comments: 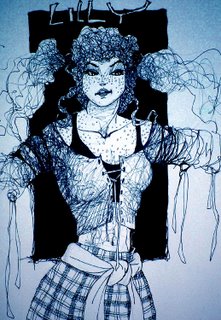 A comic book style Lilly...
Posted by allen etter at 2:11 PM No comments: 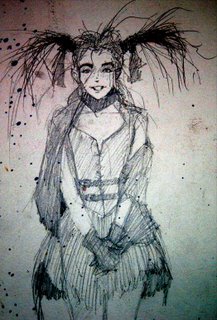 Pencil sketch of Lilly for Darkness Aftermath
Posted by allen etter at 2:10 PM No comments: 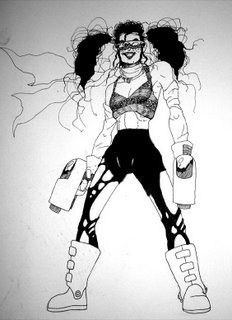 An ink version of Lilly drawn as a techno chic...kinda weird, actually, but it was for a different story.
Posted by allen etter at 2:08 PM No comments: 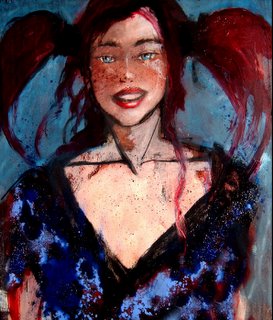 I need a bunch of cotton cloth...actually, canvas, cotton cloth, leather, fake leather, fake fur, (or real) a case of Steele Reserve, twine, and or rope...for costumes (natch).
Posted by allen etter at 8:52 PM No comments: