Now that Entropy Gate Journey is done, I'm really looking forward to editing the follow up, Beyond. In the mean time...I'm finishing teaching my four classes at IPFW, about half way through writing next year's musical production "Come in out of the Rain" (a musical comedy that takes place in a club in the 1940s...all of the characters are named after characters in Humphrey Bogart films), halfway through two classes at ITT, and currently reading Edmond Rostand's "Cyrano de Bergerac". 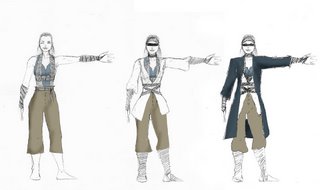 This set of images will show Mary M. how to create the layered look of the costume.
Posted by allen etter at 12:00 PM No comments:

Inspired after the setback - drifters reborn 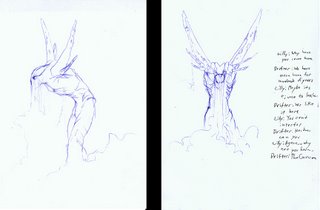 Well, we had a slight setback. Our guy who was to animate the DRIFTERS backed out. So...I was sort of bumbed and frustrated with all the work that had gone into designing these creatures...but then, last night, an entirely new design hit me and I'm much happier with the look.
Posted by allen etter at 11:10 AM 1 comment: 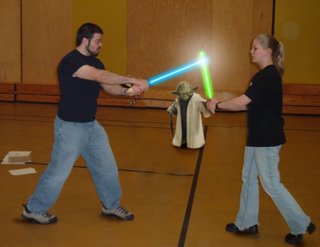 He offered his advice but only if we used his weapons...
Posted by allen etter at 2:12 PM 4 comments:

the shooting schedule should be ready by the end of next week.
Posted by allen etter at 8:42 PM No comments: