Just got some more canvas for the wrist ties and 'boots' for the costumes. I'll be finishing Gwen's up for next Friday's meeting...if all goes as planned.
Posted by allen etter at 11:17 AM 3 comments:

Almost forgot...the long-lost Jay (the camera man) has reported in...he has reviewed a list of films shot by Tak Fujimoto and has already started shooting tree bark and rain for the opening credits!!!! HOW FREAKIN'COOL is that???!!!
Posted by allen etter at 11:18 PM No comments:

I went to my in-laws house Sunday and checked out the forest they are planning to buy...it will be perfect for the 'clearing' shots taht are just outside of the main meeting hall and Gwen's home...very excited! I'll post images tomorrow.
Posted by allen etter at 11:15 PM No comments:

Origins of the Garum

Originally I had built this story around the Garum with a strong link to the Entropy Gate story line...the more I pursued the stroy, the further away from EG I drifted. The Garum has had 4 origin stories written and I've finally found the final one. I plan to include the other three in the DVD when we release it.

I just scouted out a plot of land where we'll film the "Gwen vs Beggar" fight scene...Bluffton, IN. Cool location...excellent trees.
Posted by allen etter at 11:12 PM No comments:

Long week...but the light at the end of the tunnel...

As I sit here at IPFW with my lunch on the table...at home...I was thinking of locations for shooting and outside, just beyond the ceramics building is a river with a little island...and lot's of trees...love it!
Posted by allen etter at 12:44 PM No comments:

SATURDAY'S MEETING HAS BEEN CANCELLED...WE WILL RESCHEDULE AND POST THE NEW DATE TOMORROW.
Posted by allen etter at 2:25 PM 1 comment: 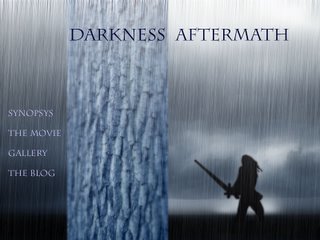 I put this together as a possible home page...
Posted by allen etter at 11:21 AM No comments:

I'm looking for someone to design THE OFFICIAL web site for Darkness Aftermath...any takers?
Posted by allen etter at 9:56 AM No comments:

Carrie (AKA Lilly). Lost your number. Call me or email me. asetter304@aol.com
Posted by allen etter at 7:15 PM No comments:

I WOULD LOVE TO SEE THIS 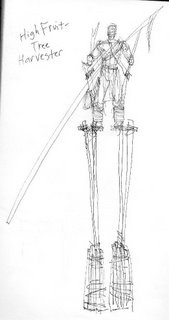 This would be cool...it's aman on stilts with large "feet" to keep from sinking in mud...he can gather fruit from the high trees. Perhaps CG in the background if not live action.
Posted by allen etter at 2:17 PM No comments: 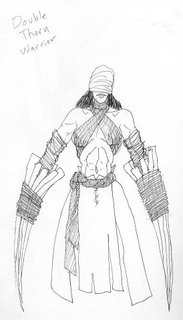 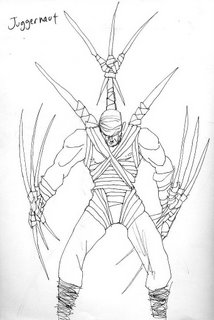 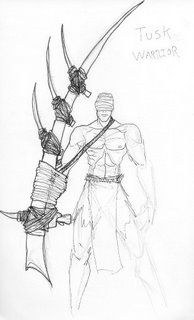 I've really been working on a lot of weapon designs...not sure how many we'll actually have, but I'm looking to put together a team to start building these.
Posted by allen etter at 1:22 PM No comments:

done with that mess...

I finished converting the story boards to photoshop and coloring them the right hue for the scene (rain exterior - blue, interior - orange, exterior with the Garum - blue green, Scenes with Drifters - red)...I ended up with 525. I can now start editing these as they are all saved as jpgs. However, I have since added a few other scenes. One in particular is the "Wedding Celebration Dance". A single dancer emerges from her home and performs a dance with wing-like contraptions on her arms...these catch water and she is able to store water and pour out water onto the ground to create a rythm with the sound of the rain...she also has long streamers tied to her belt that have rocks on the ends. As she spins, the rock streamers fly out. When she stops, the rocks clack together and make more sound. The dance is enjoyed by the audience as they listen to the rocks and water and feel the vibration in the ground of her feet pounding the mud. I have yet to story board this sequence...there are other scenes that are emerging as well...
Posted by allen etter at 7:42 PM No comments:

My original idea for the opening credits was a series of blue text credits against a black background with lightning flashing between texts...however, during the rain the past two days i saw the water flowing down the truncks of the massive trees that line the area i live in...i've instructed the camera man (jay) to film close ups of water flowing down tree trunks and we'll place the opening credits over that footage...its a softer opening for the film...i'm pumped! Now it's time to go down stairs and watch the last half of SIGNS...pay no attention to to 'time' that this post is posted... i need to change something on the blogspot so that the time is more accurate...it's actually 11:15 pm...
Posted by allen etter at 11:03 PM 1 comment:

One of my IPFW students today, after reviewing the blog, asked who he thought my style best resembled. There was a bit of a pause as I contemplated saying, “I don’t know” or “Me?”. He suggested that the images seemed a bit M. Knight-like and I realized that I had to agree a bit. Darkness Aftermath is a bit scary at times – like Signs and Sixth Sense – and it is about a spiritual reawakening or testing of faith – Signs. But as mentioned earlier in the blog, I’m also going with the Spielberg/JAWS school of thought by saving the ‘monster’s’ revelation until the third act of the film. I’m also trying the Lucas method of creating the ‘world’ and characters first, then working on the story (not to say that he’s the only one to do that, but I’ve been reading the ART OF STAR WARS 3 and it’s a fascinating read about Lucas’ creative process). 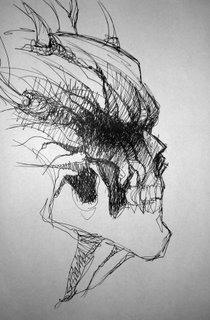 A profile...I think the main problem with the sculpture of the Garum is the fact that the head is too small.
Posted by allen etter at 12:21 PM No comments: 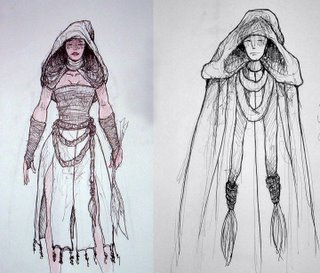 When Cllar and Gwen get married, I thought that perhaps a costume change would be in order...
Posted by allen etter at 11:50 AM 5 comments:

Did some sketches of some of the warrior's weapons.
Posted by allen etter at 11:33 AM No comments: 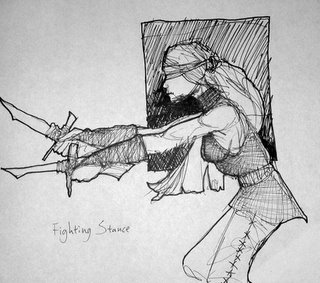 I was just sketching and came up with this image of Gwen fighting.
Posted by allen etter at 11:12 AM No comments:

Click on the image to get a larger view of the drifters...which one looks the best?
Posted by allen etter at 10:55 AM 3 comments:

Have I mentioned Jaws? I've always loved that movie (the sequels were total trash...though for laughs, watch the last one...it's practically a parody)...so...why mention Jaws? Because the shark is never really revealed until the last third of the film...that's how I plan to handle the Garum...I just added frame 337 of the boards (out of 530) and it's the first time you see the Garum in relationship to a person. Hopefully it'll be a big moment as the audience until this time won't know if the creature is 6 feet tall or 9 feet tall. More sketches posted tomorrow.
Posted by allen etter at 8:10 PM No comments: 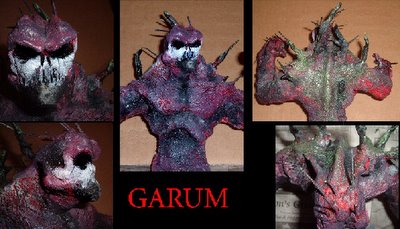 Here is the latest design for the Garum. I'm not too excited about the color. I'll probably mess around in photoshop and make the flesh more of a gray tone. I also want the skull to have less contrast with the flesh so it'll have to be darkened. I am quite satisfied with the Garum's back. The sculpture was made with sculpy and plumber's putty.
Posted by allen etter at 11:35 AM 4 comments:

meeting of the minds...

It looks like we'll be getting together for our first meeting the last Saturday of Jan. 2006. @ 5:00 pm. My lovely wife will make snacks and munchies...we'll review the animatics and discuss the shooting schedule...anyone who is all ready involved is invited...that means you, Ron, Jay, John, Danielle, Dorien, Christy, Jen, and the other Jenn and the body gaurds and Olivia and well, you get the picture...(Lana, I'll have a camera ready for you)...this is the date unless something comes up...stay tuned and I'll get you directions to my house...
Posted by allen etter at 10:12 PM 1 comment: