By the way...Danea is pronounced Duh-NAY-uh
Posted by allen etter at 1:47 PM No comments: 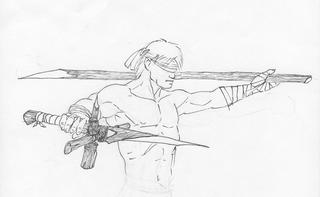 Wooden swords should be fun to make...
Posted by allen etter at 9:44 PM 1 comment: 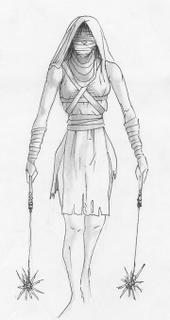 Here is an image of thweapons used by one of the hunters...
Posted by allen etter at 9:34 PM No comments:

Jake's graphic novel is going...check THIS out.
Posted by allen etter at 11:02 AM No comments: 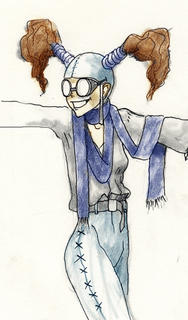 Just another image of everyone's favorite looney-goof-hero-girl...
Posted by allen etter at 9:37 PM No comments: 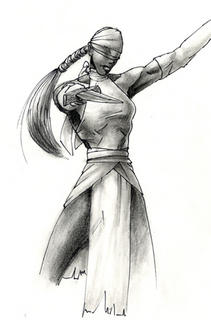 I've become rather fascinated with Danea, though she is only in three scenes...family and the family tree are important to the people in Darkness Aftermath...so I thought, what if she's black or asian or something other than that of Gwenn, her sister. It would mean that one of them was adopted, but since they are blind, they wouldn't know it...
Posted by allen etter at 7:57 PM No comments:

I found the (almost) perfect woman to play Danea. The only problem was the fact that she is about 5 inches shorter than Gwenn. She needs to tower over Gwenn and just about everyone else. The serch continues.
Posted by allen etter at 9:32 PM No comments:

it's been hot...really hot!!! I've been miserable and unable to work on the project because I just sweat all of the time and am miserable...but it finally started raining today. 'bout time...maybe I won't be so cranky now...maybe I'll get some work done...
Posted by allen etter at 9:44 AM No comments:

jus' so ya know

Anytime I post a picture, if you click on it, you should be able to see a larger version of it in a new window. The 'Death Star' loses some detail in the smaller image. Also, the sculptures are almost finished. I should be posting images of them on Monday. And I'm going to start composing for D.A. tomorrow. Most of my E.G. music until now has been rather...mellow...deep throbbing tones that seem to move as if floating on water. Some, unfortunately, have said it sounds rather new age, though I have tried to follow in the path of Tangerine Dream and (from T.D.) Christopher Franke (Babylon 5). The music always sounds 'space-like'...does that make sense? The stuff for D.A. is going to be much more rythymic...I've been inpsired by the new "Battlestar Galactica" themes and the opening 'space battle' theme of Star Wars III. I'll also be including more percussion...some will be from intruments I've created. I'll be playing a three stringed BUKKA (the name my elementary students gave the intrument I designed eight years ago) during the "love theme"...I have some PVC instruments and a yet-not-finished intrument made with Piano strings. I'll hopefully be relying a lot less on keyboard, though the opening theme is going to be played on a synth. nuff said.
Posted by allen etter at 5:54 PM 2 comments:

And this is sorta cool too...

I just got asked by the Criminal Justice dept. at ITT Tech. to do make-up on an actor who is playing the part of a recently murdered...uh...corpse. Neck wounds and defensive hand wounds. Apparently the video will be part of an on-line course and will be on the web...fun stuff!
Posted by allen etter at 8:28 PM 3 comments: 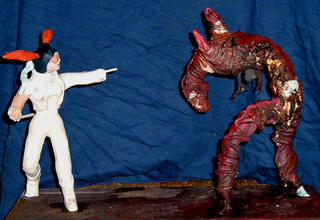 There are two scenes in which Lilly faces 'demons' known as Drifters. The Lilly sculpture is not quite finished...I am reworking the hands to hold weapons. The Drifter is close to being finished...it has no arms and only horn-like growths protruding from its back where wings once were...it is severely burned and charred with flesh hanging from its emaciated form.
Posted by allen etter at 8:21 PM No comments: 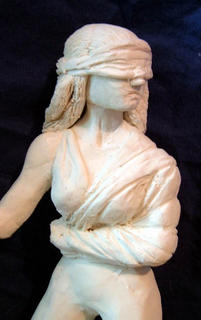 This is the sculpture of Gwenn after her shoulder is dislocated. She has wrapped her left arm against her body to keep it in place. She is about to face the Garum in the final showdown.
Posted by allen etter at 5:47 PM No comments:

I was working on the sculpey-sculpture of the Garum and Gwenn...Gwenn looks great! The Garum fell over in the oven and lost his head...literally...I'll be posting images next week.