One hour and twenty minutes...

That is the current length of the movie. I am still short about five minutes of footage that I am still trying to find and about five minutes of green screen and SPFX shots. It looks as if the movie will be an hour and a half long. That does not include the end credits. I'm psyched. I've been trying to get this thing edited for months now and finally a solution was dropped in my lap. a great friend of mine hired me to video tape an interview and then edit it. He said that he could not pay me, but he would let me use his TOSHIBA (his brand new TOSHIBA) Laptop to edit my movie. For two weeks now I have been editing and am almost done. When I realized the task of taking all that I had edited up until the TOSHIBA and cutting it into what I was about to edit, I scrapped it all. Two weeks ago I started fresh. I am extremely pleased with the results. Next week we (the team and I) will pick a night to view the rough cut. Can't wait for the SPFX to come in.

I have got to get an earlier start on my evening editing routines!

Anyway, I am hoping for Battlestar Galactica season 3...


I am not going in to work Thursday.

A few posts on down a comment was left about the difference between my working with 8mm vs digital. Sure, there is something nostalgic about holding the film in my hands and getting superglue finger prints on a much needed frame, but I am truly glad that those days are behind me (as is my back...hated bending over the editor all night long). And here is why...

The other day I was showing my Illustration class a documentary on the making of "Blade Runner" posters. One of the artists said something to the affect that photoshop allows anyone to manipulate images...and that is true. However, I look at photoshop in the same light that I look at oil painting or any other media. It is different than oil painting, but it is just a tool - much like the camera obscura was 'back in the day' (and a lot of artists were dogged for using it). Just google "Photoshop art" and you'll see way more worse art than good art. If you aren't an artist, all the software in the world still makes your images look naive.

So, as far as editing 8mm vs Premiere Pro and needles scratching the emulsion vs After effects? I prefer the digital. It's quicker, cleaner, easier and allows me to use more of my creativity instantly. Now I can alter color and sound with out having to rely on the limits of 8mm. I can edit the very day I have shot a scene. I can cut and re-cut and re- cut over and over without worrying about ruining the original print.

I still draw on paper, I still oil paint and watercolor, still sculpt with clay and still (on occasion) shoot 35mm stills. But I'm sold on digital when it comes to editing. Hope that makes sense without sounding like I am anti film.
Posted by allen etter at 1:57 PM 3 comments:

Apparently there is a new movie coming out with Julianne Moore about a town where everyone suddenly becomes blind except for her. ummm...


I just hope it's not raining in this movie.

I started editing when I was quite young...

...maybe 13 or 14 years old. I had bought an 8mm camera and made some short films. Later I upgraded to super 8mm and sound and started cranking out short 5 minute movies. My longest was 28 minutes. It took many months to edited.

I currently edited a sequence for Aftermath that took about 5 hours. It is a little under a minute and 30 seconds...and it was not fun...at first. The problem was that there are three people in the woods, Gwen, Elder Stahl and Granes. All three need to interact. Problem was as follows...

Norfleet (Granes) only had a few hours one day to shoot his three scenes. He could only do two scenes with Danielle (Gwen) where they interact. The third was shot with him leaning against a tree talking to Gwen who is seated further away from him against her own tree. However, by the time we got to Gwen's scenes, Norfleet had to leave.

A month later we shot Elder Stahl (Susie) walking with Gwen and talking to her before she is to meet with Grane.

Problem was, I was not there to shoot it and a lot of the footage is unusable not to mention that it was all shot from the same camera angle with the same camera movements walking through the same track of woods...Ted even made a brief cameo as he was seen walking next to Gwen and Susie. Susie became quite ill, tho she's doing fantastic now, and for budgetary reasons her costume was taken apart and re-sewn into another costume.

At first I was angry (this was the first time I had actually seen this footage as my computer is too slow to handle the great amount of footage we have. But then I took it as a challenge. We lost a few lines of dialog and I had to get just a wee tad artsy, but it's going to work.

I think that in the end, it might actually be better than what I originally envisioned.
Posted by allen etter at 10:00 PM 6 comments:

Danea (Debbie) practices her 'moves' but is interrupted by Kassel...he's got some bad news for her...

One of my top ten favorite movies is JAWS! I just saw this on line...

"LITTLE ROCK, Ark. (Feb. 10) - Roy Scheider, a two-time Oscar nominee best known for his role as a police chief in the blockbuster movie "Jaws," died Sunday. He was 75.

Scheider died at the University of Arkansas for Medical Sciences hospital in Little Rock, hospital spokesman David Robinson said. The hospital did not release a cause of death."

The last movie I saw him in was "THE PUNISHER" and he was still lookin' great. Monday night I'm watching JAWS. 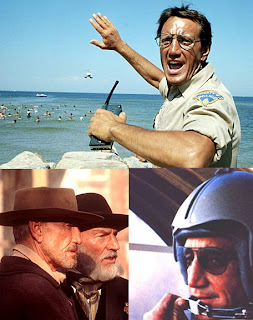 Ted posted a new trailer on the main page...he also updated the web site. Check it out here. Ted still has some bugs to work out on this site as the trailer takes FOREVER to load...hopefully you'll find the wait worth it.
Posted by allen etter at 11:37 PM No comments:

Lana and Joe at the show. 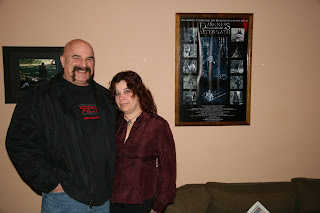 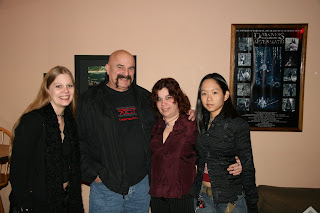 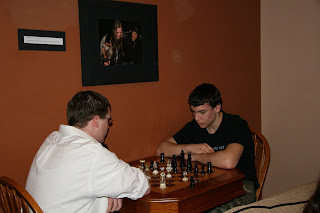 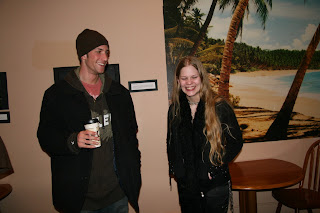 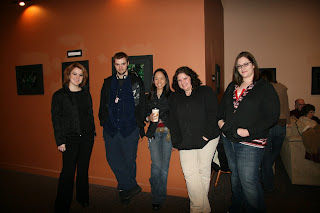 Ted and some more students from IPFW. 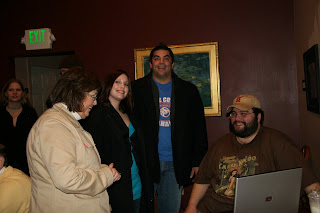 Random shot of the coffee house. 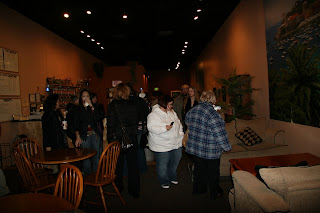 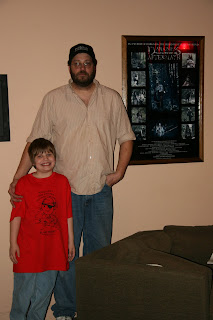 I just looked closely at the photo of me and Max...I need to shave and a have a long rest...I didn't realize that I looked that beat up. What a week...I'll post later the week that was WATER WORLD!
Posted by allen etter at 9:59 PM 6 comments:

Tonight is Lana's photography show at the GRIND COFFEE HOUSE

Lana is having a show at the Grind. She is displaying 16 photos that she took while on location shooting our movie. I am displaying seven sequences of screen grabs and my poster. We'll post photos of the show tonight.
Posted by allen etter at 3:14 PM No comments:

I have been enjoying Sean's music for some time now and have been cutting the scenes together using his stuff. But today he dropped off the final mix nd I am just floored! IT ROCKS! This is more than I could hope for!
Posted by allen etter at 12:09 AM 2 comments:

I told Danielle, two years ago, that the shoot would be rough...but I'm not so sure she realized how rough it would be. We had her bouncing off of trees, crashing to the ground (repeatedly), getting punched, tackled, hit, slapped and pushed. She endured it all. What a trooper.