Borat, The Office, Punk'd...there is so little entertainment out there anymore. Does anyone reme,ber what it was like to turn on the TV and have shows entertain you without that awkward silence. Yeah, I know, the critics love BORAT because he essentially said what Michael Richards said...'cept he was 'funny'...though if his SNL performance was anything close to his stupid movie, then he deserved the beating he got after the show...I still like Hugh Laurie because he is great as Dr. House, but I wish that he had let Borat get his just desert.

It seems that we can no longer be entertained unless we are watching someone get humiliated. I remember walking out of the living room when my wife and I watched "Meet the Parents". How is an hour and a half long movie about making someone feel absolutely worthless and humiliating them repeatedly concidered humorous entertainment.

Entertainment and writing in Hollywood has been at a steady decline for years, but "reality TV" which is anything but reality and "humiliation" comedy is causing so much damage to people...I wonder if anyone can laugh any more unless someone is a) humiliated b) Punk'd(what ever that means...MTV idiots on drugs pulling childish pranks on people most likely) or c) being SHOCKING!

Let's face it...sit coms are all about a) stupid dads b) over sexed and under satisfied wives c) smart alec kids who talk back to dumb dad and then have sex with under satisfied teenagers d) sarcastic idiots who find it funny trashing Christian values...

There is no more creativity in Hollywood

Just read this...don't these idiots have a clue? Remember the shot-for-shot remake of Psycho?

The proposed sequel film Poltergeist: Kayeri has been shelved in favor of a shot-for-shot remake of the original 1982 film. "I've just received official confirmation that the original idea for Kayeri will not be used for the remake," the source said. "Instead, the new film will be a straight-up remake of the first film. Pretty much frame-for-frame. Just think Hills Have Eyes."

According to the site, screenwriter Clint Morris, who wrote the script for Poltergeist: Kayeri, will not be involved in the new project. The source also confirmed that original cast members Craig T. Nelson, JoBeth Williams and Zelda Rubinstein will not appear in the remake.

The original Poltergeist, produced by Steven Spielberg and directed by Tobe Hooper, centered on a family who moves into a new housing development and discovers that their home is built over an ancient burial ground inhabited by angry spirits. The film spawned two theatrical sequels and a television series, which ran from 1996 to 1999.
Posted by allen etter at 7:33 AM No comments:

we're on our way to nanotech

Introducing the nano battery,
as thick as a strand of hair

Professor Menachem Nathan, head of the nano-battery project at Tel Aviv University, said the new battery, with the thickness of a strand of hair, was safer and could recharge faster.

Tel Aviv University has sponsored an effort to develop and patent nano-battery technology. A team of university scientists developed the technology for fast charge/discharge batteries that eliminates fire hazards of lithium-based batteries and could mark an alternative source of power for mobile devices.

"The battery would be especially sought for military applications in equipment used under extreme heat conditions," an industry source said.

Nathan said the safety advantage over lithium was not the focus of the research.

"The development of our technology wasn't actually geared to solve the flammability issue," Nathan said. "It was just a side effect."

Organizers said the university would seek an Asian partner for production and marketing. They cited such companies as Sony or Toshiba.
Posted by allen etter at 2:51 PM 1 comment: 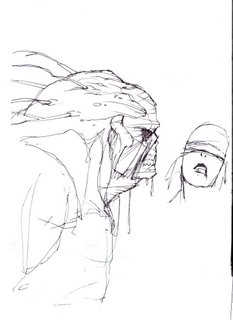 The rewrite is coming along smoothly. I am a lot happier with the story this time. Many changes...many...
Posted by allen etter at 3:09 PM No comments:

After shooting on Friday with a REAL camera...I am even more excited about the movie. I'm going to do some test shots next week...
Posted by allen etter at 9:42 AM No comments:

Danielle as a psychopathic cook

What a night…I got to ITT at 4:00 pm and we finished at 10:30…We shot half of the sword fight video (choreographed to the music from Final Fantasy 7) complete with me standing on the bumper of my father-in-law’s truck while balancing the camera on the back cab to simulate a rotating dolly shot that totally rocked…then we destroyed the teacher’s lounge for a TOOL video that had two chefs creating cookies without eggs…there will be images posted next week of both projects…it was a long day…

btw...danielle was the lead singer of the song...i still don't quite get TOOL because I'm almost 40.
Posted by allen etter at 12:38 AM 2 comments:

By the way...the images of the nice young 'dead chick' are actually those of the star of our film, Danielle. She will be playing Gwen...and it's nice to see that she isn't afraid of a little blood because she takes a beating in the last act of the film.
Posted by allen etter at 7:19 PM No comments: