GEEK MONTHLY reports that a direct-to-DVD movie is in the work based on BATTLESTAR GALACTICA:

Despite declining ratings for BATTLESTAR GALACTICA on SciFi Channel, nearly universal critical acclaim along with robust DVD sales have led Universal Home Video to consider greenlighting a BATTLESTAR GALACTICA direct-to-video telefilm, which will presumably air on The SciFi Channel, after debuting on home video, sources tell GEEK. If it goes forward, the two hour telefilm will shoot in March during the series hiatus and prior to the commencement of production on the series fourth season in June. While there is no story for the telefilm at present, plans are afoot to come up with a screenplay that doesn’t step on existing continuity for the series, but utilizes most of its existing sets. There is also speculation the telefilm will somehow tie into the mythology for the GALACTICA spin-off series, CAPRICA, which has not been officially greenlit by SciFi Channel.
Posted by allen etter at 1:11 PM No comments:

Been a) writing the new script...working out the last three scenes.
b) working on costumes...Gwen's is almost done...I still want to use some of Mary's...gotta get in touch with her.
c) drawing for my upcoming show.
d) storyboarding.
e) watching season one of BATTLESTAR GALACTICA
f) Editing Entropy Gate - Beyond and...
g)...writing Entropy Gate - Destination.
Posted by allen etter at 5:58 PM No comments:

I'll be posting images soon...I was aging Gwen's new costume last night with bricks...then i soaked it in a mixture of paint thinner (will blue, brown and red oil paint), wood stain and black latex paint. It's drying outside. I'm going to let tomorrow's rain rinse it and then I'll dry it again. That's when I'll take the pictures.
Posted by allen etter at 11:53 AM No comments:

also, revamped the costume for Danielle...we're going to have a photo shoot soon...
Posted by allen etter at 10:04 AM No comments:

ART SHOW ON THE HORIZON

Got a show coming up soon...Jan. 3, from 7-9 at the GRIND COFFEE house. I prefer showing at coffee houses over Galleries because a) they are far less stuffy, b) more people show up to them (coffee houses that is) and c) a lot easier to get into...Chuck out at the GRIND originally had me down for a July, but his Jan. guy is a potter and wasn't going to have any work on the walls...so...long story lengthened, I've got some framing to do...oh yeah, and a few new peices to work on. Kevin gave me some frames he was going to toss and they're huge! YAY for big art.
Posted by allen etter at 9:54 AM No comments: 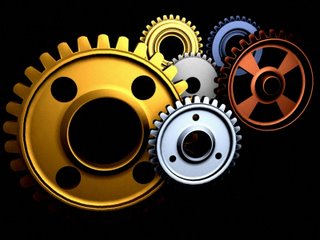 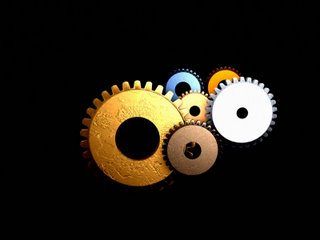 Jess Murry from ITT is working on the logo...I'm looking for someone to animate the opening sequence...check out the boards.
Posted by allen etter at 10:42 AM No comments:

click on the boards to get a bigger picture 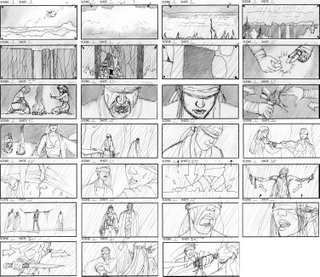 As stated earlier, I have decided to restoryboard the whole film. I realized that I was being creatively hypocritical. I was creating and designing the look of the film based on what I thought we could produce. An extremely limiting thing to do from an artistic standpoint. After looking at Mawete's CG work and several other's, along with everything I've stated so far about why I should reboard, well, I'm going nuts (in a good way). Check out the first thirty...
Posted by allen etter at 12:12 PM 2 comments:

A while back I quoted G'Kar from B5 as saying "and so it begins..." well my son Zack slammed through the series in about a month and I walked in on the episode where KOSH said the line, not (RIP) G'Kar...so now I quote KOSH..."And so it begins..." (again). I'm redoing all...and I mean ALL of the story boards! I'm at 18 this evening and they look so much better than before...I'll post some (hopefully) on Wed.
Posted by allen etter at 1:37 AM No comments:

Originally Lilly hits the Garum with a rocket launcher...in the new version, she hits a hoard of flying drifters...they ooze black smoke.
Posted by allen etter at 9:08 PM No comments:

Things are really back on track...

1) the new script os far superior to the original.

2) Mawete, a fantastic artist and CG guy from IPFW, is on the team. Hopefully I'll post some of his work soon.

3) Two more actors have joined the team as well.

4) My new ITT video productions class is begging for the opportunity to work on the film.

5) We may have a lead on a camera since the last lead turned out to be stale milk!
Posted by allen etter at 3:11 PM 2 comments:

I was begging for creativity...watch some by clicking HERE
Posted by allen etter at 9:41 AM No comments: