Just found out that the sound lab is being worked on. They are expanding the studio so we are out of luck for ADR for now. poop!
Posted by allen etter at 12:46 PM No comments:

This week I'll be getting Matt the revised script and he'll dive fully into the ADR.
Posted by allen etter at 12:41 PM 2 comments:

Today I had to return the laptop that I was using to edit the movie. Greg needed it for church since his old one was fried. Sigh...But the good news is that I am done with the editing and I have several DVD's burned as well as everything backed up on the external hard drive. I plan to load the movie onto one of the computers at IPFW (maybe even on my office computer...I move into my office on Monday!) But still, I'll miss the late night and early morning editing session...
Posted by allen etter at 1:46 PM No comments:

It seems that the return of Danielle is just the beginning of the good fortune which seems to have landed at our camp. I was able to get the final rough cut done, rendered and burned onto a DVD. I can now get one to Matt for sound, one to Ted for the Lilly and the demons scene and one to Ron for our Garum shots. Good stuff!

Oh, and Michael, I am resending the package today. It has the hat, the graphic novel and the soundtrack.
Posted by allen etter at 10:30 AM 2 comments:

It seems that Germany likes us...sort a. 24 visits. What does this mean? Perhaps they could leave a message...no?
Posted by allen etter at 11:18 PM 5 comments:

The search is over...

...Finally got in touch with Danille. She is alive and well and ready to do the narration and voice over! Apparently she was abducted by aliens and only recently returned to earth.
Posted by allen etter at 8:47 PM 2 comments:

I dumped all of the raw footage onto an external hard drive (supplied to me by Arizona Ted) and the lap top runs smoothly now. I've been placing cloud montages into the movie and it is working out nicely. Ted had a Disc of clouds that we were using, but then with the move, stolen lap top and alien invasion, I sorta decided that I wanted something eles in the transitions. I was going to go back to the EVIL XL2, but then came across some high res images of storm clouds that I had shot two summers ago. They were on the PC in my den that no one uses. They are cutting together quite well.

Also, I've been rethinking my (not so much hate) disgust with George Lucas. The first Star Wars movie changed me in ways too numerous to state in this meager post, and it was that movie that has inspired me to be creative. Empire also sparked me. Jedi, not so much (due to the Ewoks). The space battles and saber fight did bring me back to the theater 10 times, but the Teddy Bears really drove me nuts. When the new trilogy came out, I was stoked. I even liked Phantom. Liam and Ewan were great. But the more I watched it, the more I started doubting it. Missing was the awe I felt when the Star Destroyer flew over head above Tatooine. But then I thought, it's an okay prolog and Darth Maul was wicked awsome (yeah, I said that). But then the next one came out and I was like...okay...this is somewhat better than the first. But couldn't they aford an actor for the part of Anakin? But then there was some cool battles and saber fights. And I knew that Lucas wouldn't let us down with the third one. When Revenge started, I knew that THIS was the one I was waiting for. And it seemed, at first, to be IT! The battles ROCKED, Ewan was great and someone gave Hayden some (SOME) acting lessons. The saber duels were, of course, fantastic. I felt good leaving the theater (although there were some nagging questions at the back of my mind...1) how does Obi wan age 40 or 50 years in a matter of 18 year (Owen Lars seems to be troubled by the same aging problems) 2) Why did Luke keep his same last name? Couldn't Darth Vader simply say, "Hey, any Skywalkers out there? I need you on my team." If you hide a kid shouldn't you change his name? 3) In Empire Ben says "that boy is our last hope." and Yoda says, "No...there is another." So did Ben forget about Luke's Twin sister. 4) JAR JAR 5) Midi Cloreans (sp?) Really? Seriously? 6) If the force runs strong in family lines, wouldn't it be wise for Jedi to hook up and make little baby Jedi? ARRRG. It all started falling apart. And then it hit me. And it hit me HARD. I liked the space battles and saber fights in VI, I, II and III, but that was about it. Star Wars and Empire weren't just about space battles and saber fights. They had soul.

So I started reading "The Making of Star Wars" again. Lucas was a driven man and had real faith in his actors. When I read about the way he praised his actors it makes me sorta shocked that he would have Terence Stamp stand next to a pole with a post it note that says Natalie Portman and expect him to act since Portman was unable to be there. He seems to treat the actors as effects now, when before he had such high regard for them.

Our movie has been frought with many curses and it's great to read through the Making of Star Wars and see that Lucas continued forward despite all hell breaking loose. But maybe that's what makes a great movie. When he had all of the money in the world to "Make the movie I (George) always wanted to make" he seems to have lost his soul...or did he?

Conspiracy Theory time...Paul and George are dead. My cousin Steve once told me the story about the rumors of Paul McCartney's death and replacement. I was buying into the whole story as he showed me the cover of "Abbey Road" and Paul had no shoes (becuase he was dead). Then he started laughing at me for believing the whole tale. But, what if George died after Empire or midway through Jedi and was replaced by a look-a-like (with a large neck). That could explain a lot.

Star Wars is still my all time favorite movie and it has inspired me to make movies, but episode I, II, and III and half of VI are just cool space ship battles and saber duels.

A wild ride and a great day.

1) turned in my letter of resignation at my 'other' job.
2) signed my contract at my 'new' job.
3) showed the rough cut to some of the local neighbor kids (they liked it).
4) sat out on the porch with an ONYX and some Merlot.
5) watched a really cool storm pass through (tornadoes spotted, but no one hurt).

After the storm passed there was a really cool rainbow in a sort of yellow green sky. I'll post photos later.

Then, late last night, watched (and was totally blown away by) the latest episode of Battlestar Galactica.
Posted by allen etter at 10:11 AM 8 comments:

Spent the whole day doing construction work for a friend. I arrived on the site and found that the person who was working on the house before me had not finished his job. I spent all day finishing his work. Tomorrow I start doing the job I was hired to do. Things were going okay until the nail gun shot a nail into my palm. It was surprisingly painless, though it bled like a spigot. I know, I know, takes real talent to shoot yourself with a nail gun. I put a bid on a barn that I might paint. If that falls through for Friday, I'll be back on the computer at IPFW doing some more Rain Effects with my new favorite program.

Oh, and Ted, your fired!

Just kidding...thought you might be missing the luv!
Posted by allen etter at 9:16 PM 3 comments:

I got onto After Effects today and started adding rain to some of the scenes. I LIKE IT. Can't wait to start learning more of the program.
Posted by allen etter at 5:51 PM No comments:

...expect a lot of creativity this week...

Full time employment at IPFW! YEAH BABY! WE ARE TALKIN' BENEFITS AND POTENTIAL LIFE-LONG EMPLOYMENT! THIS IS IT! CELEBRATE! I AM STOKED!

The actual title is Visiting Lecturer.
Posted by allen etter at 10:18 PM 4 comments:

After the opening scene where the camera flies over the clouds and dips through them to skim across the forest landscape (courtesy of Michael Clark) the camera then pulls out of Gwen's eye so that we see how damaged her eye is from the rain. This was envisioned as a scene with blinking and a blindfold eventually covering the eye, but due to the lack of "Gwen" I've opted for a still shot. Here is the eye of a friend of mine. I've altered it to look like the burned eye of Gwen. The camera will pull out from Michael's landscape to the final eye seen at the bottom and then dissolve into Gwen's flashback... 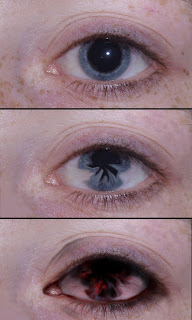